How to Steam Pumpkin for Maximum Nutrition 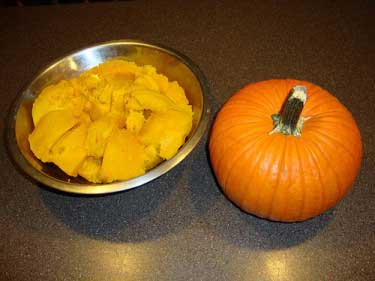 There is a better way to cook your pumpkins than boiling that will retain the most nutritional value when you eat them.

It’s also fairly quick and simple and makes for a much better tasting pumpkin, whatever recipe you’re using it for.

Smaller pumpkins tend to be far superior for eating than the larger jack-o’-lantern styles that rarely taste good.

Pumpkin breeds such as Sugar Pie, Baby Pam, Jarrahdale Blue, New England Pie and the Cheese and Cinderella varieties are often recommended for their texture and flavors.

Look for ones that feel relatively heavy for their size and have a consistent color. Avoid pumpkins with mold, bruises, cracks or heavy scarring and test that the stem is hard and the skin firm to the touch.

It’s much better to buy them whole and open them yourself, rather than get pre-cut portions which can lose nutrition with their pulp exposed.

Most pumpkins and winter squash can be stored for at least a month, some for several months, in a cool dry spot away from sunlight. Personally, I find in a cupboard away from other food to be best for pumpkin storage.

When you only need half of a pumpkin for a recipe, they can be cut in half with a sturdy knife and the remainder kept in the fridge for a couple of days, wrapped in cling film or in a sealed container.

How to Cook Pumpkins to Retain the Vitamins and Minerals

Many people boil pumpkin to cook it. Unfortunately this tends to leech many of the vitamins, minerals and other nutrients into the boiling water and down the sink rather than into your body.

A much healthier method of cooking pumpkins is to steam them in a certain way that makes them quick and easy to prepare while preserving as many vitamins as possible.

It can take a little practice, but after a few goes you should have healthy pumpkin steamed, in skinless strips and ready to eat or use in recipes in around 15 minutes.

How to Make Healthier Salads in 4 Simple Steps